Want a super easy pork chop recipe?  Pork chops with stuffing for the win!! Crock-pot pork chops are even easier.

I need to make an apology first, though.  I’m sorry I don’t take more pictures of the things I cook/bake during the process.  I have very good intentions when I start, but then I get into the actual cooking/baking and forget until it’s either in the oven or done.

I’ll do better, I swear.

Now back to the recipe.  When I say this recipe is easy, I mean EASY!!!!  Make the stuffing, brown the chops, top the chops and bake!!  And it doesn’t have very many ingredients, which makes it even easier.

The crockpot pork chops and stuffing recipe is even easier. If you need a new crockpot, I use this one.

Recipes that require a baking time of 30 or more minutes are great because you can make all of the sides while the main dish is baking.

A recipe is a good one when my kids eat it.  I don’t know how many of you have kids but they can be DISASTROUS to cook for.  The wrong meal can turn a wonderful evening into a shit storm.  Luckily, last night was not one of those evenings.

Everyone got a clean plate award. 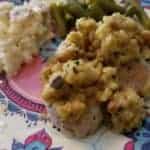 Easy 30 minute pork chops that even the kids will like.

Making the crockpot pork chop recipe is even easier.

What crockpot do you use?

I use this one. It works really well.

How do I know when my pork chops are done?

I use a digital meat thermometer. The internal temperature of pork should be 145-160 degrees F.

Won’t using a crockpot burn my house down?

I cannot confirm or deny this information because I found nothing on the inter-webs. I did find out, however, that leaving a crockpot on is the same as leaving a light on in terms of electricity usage. That’s good enough for me.

The Crafty Baking Nurse is a participant in the Amazon Services LLC Associates Program, an affiliate advertising program designed to provide a means for sites to earn advertising fees by advertising and linking to amazon.com